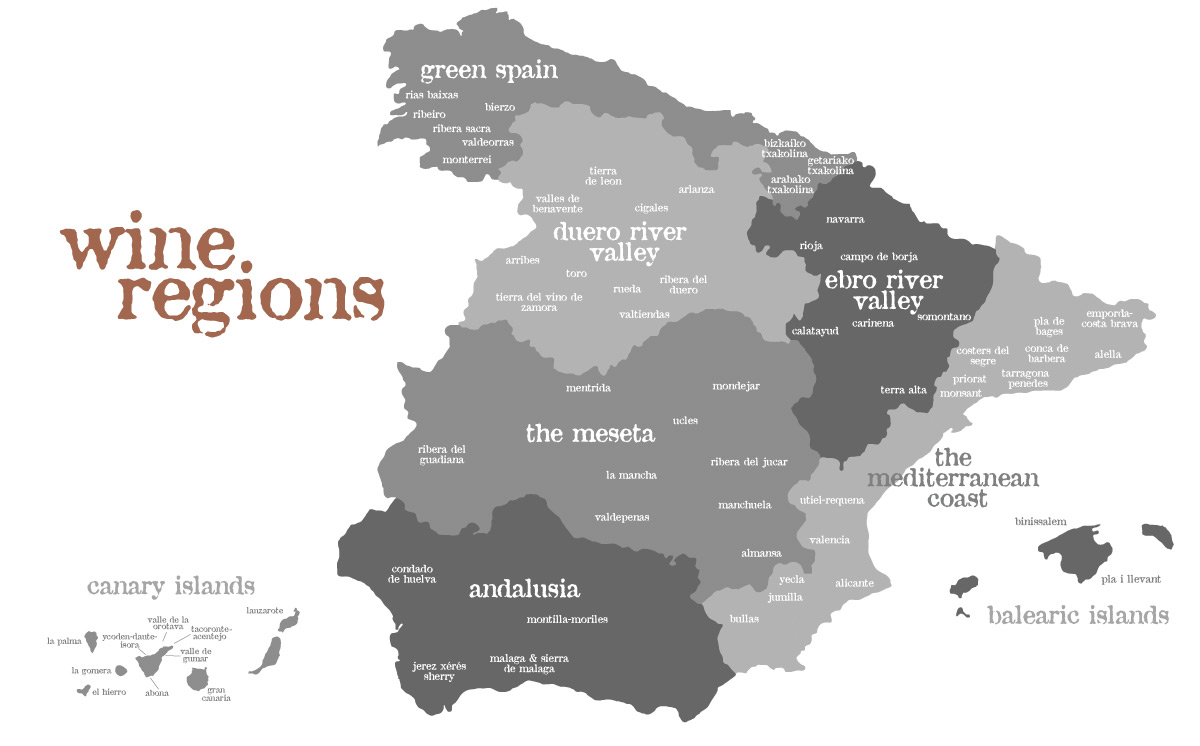 The “tabletop” that represents the center of the elevated plateau that forms most of continental Spain. Almost two-thirds of all the country’s vineyards are on these plains.Ironically, the DO’s of Almansa, Manchuela, Méntrida, Mondéjar, Uclés, Valdepeñas, and Vinos de Madrid share little in common except that they are all still relatively unknown internationally.

The ancient lands of southwestern Spain have been planted to vineyards for nearly 3,000 years. With temperatures easily surpassing 100°F in the summer, this is an area ideal for fortified and dessert wines, that come in a plurality of styles. Interestingly enough, Jerez (Sherry), receives more rainfall than many other parts of northern Spain.

These vineyard areas, whether near or far from the coast, share exposure to the warm winds of the Mediterranean. Many of the vineyards can be fairly moderate in climate and coastal, as in Alella, or remote and mountainous, as in Priorat. Any possible style of wine is virtually produced in this region; sparkling, white, red, sweet...

The northern and northwestern portion of Spain, exposed to the northern Atlantic, can be cool to cold, wet, and green—thus its name, España Verde. Climatic challenges are a consistent theme, as is the reliance upon tangy, tart white and red wines ideal with the shellfish and seafood from the well-stocked Atlantic Ocean.

Area hosting extremely elevated but easily workable vineyards, along and beyond the banks of the Duero River. Ripening is slowed; the red wines become rich and ripe but hang on to their dusty, impressive
structure. Some of the famed wine names in Spain reside in this region. Verdejo is the aromatic local white variety.

The Sierra de Cantabria Mountains shelter some of Spain’s most important and historic vineyards, including those in Rioja and Navarra. Farther south, Calatayud, Campo de Borja, and Cariñena offer great value with their juicy Garnachas. To the east, vineyards nestled along the base of the foothills of the Pyrenees in Somontano are suited for a great diversity of grapes.

With the Canaries off in the Atlantic and the Balearics lying in the middle of the Mediterranean, both groups of islands enjoy temperatures that are relatively moderate. Many wines here are produced from a number of indigenous and unique varieties, and again, altitude plays a key role; Spain’s highest mountain is on volcanic-originated Tenerife!